Our Goal: To understand the workings of an aquaponics system and how it could possibly serve as a tool to sucess to a demographic in need.

A system of agriculture that uses both, aquaculture (raising fish) and
hydroponics (soil-less growing plants).

Waste from farmed fish is converted to supply nutrients for plants to grow.

Meanwhile, the plants shade the pond to keep it cool and filter the water for the fish, and in turn the pond waters the plants.

What works best with aquaponics?

Plants: such as squash, cucumbers, broccoli, cabbage, and cauliflowers require a very well established aquaponic system because they have higher nutritional demands.

Fish: use either tilapia, bluegill, or koi because those have been proven to be the most successful in other aquaponic systems.

Note: The more fish used in the system, the more luck with growing fruit plants such as peppers or tomatoes.

Components of an aquaponics system

Rearing Tank: A tank or container that houses fish and aquatic animals.

Settling basin: A unit that can capture uneaten food and detached biofilm. As well as being a place where fine particles can settle out.

Biofilter: A location where bacteria can grow and convert organic wastes to carbon dioxide and ammonia to nitrates, which are used for plant nutrients.

Hydroponics: The place where plants are grown, taking excess nutrients from the water.

Sump: The lowest point in the system. It is here where the water gets pumped back into the rearing tanks. 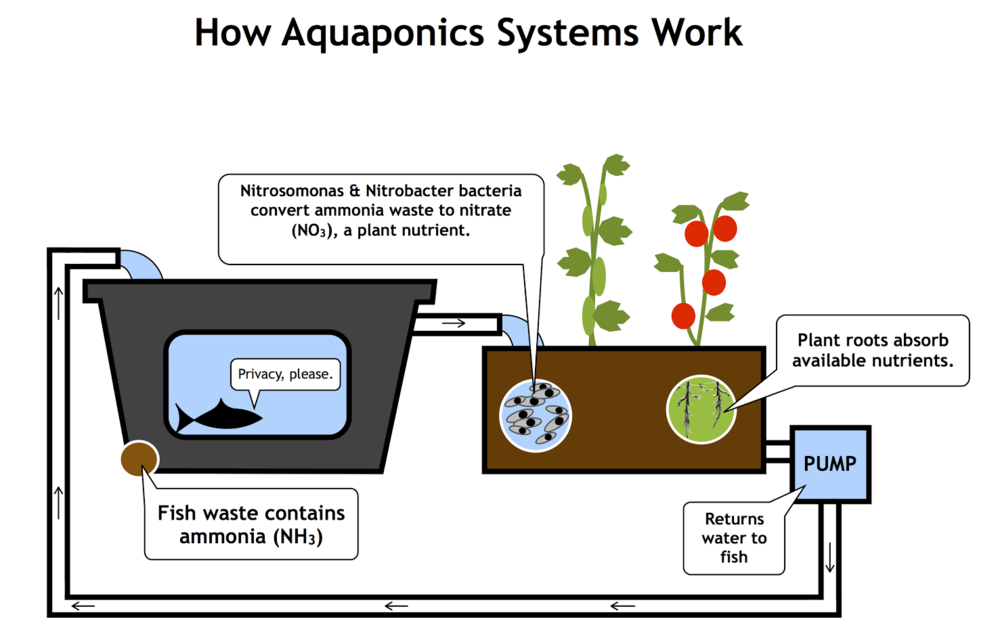 Energy requirements for anaquaponics system
In all aquaponics system the plants and bacteria are able to filter out the fish waste but an external energy source is needed for an electronic filter and pump to keep the water circulating.

These energy requirements have been modified and are relatively small. They can be met through solar power or other alternative energy sources.

Who can benefit from aquaponics?

Our initial area of interest:
Rwanda

Interview with Dylan Robertson
What did he do?
Robertson was approached by Journeyman International to help develop and implement an aquaponics system in Rwanda. He traveled to Rwanda to help a small village design and set up an aquaponics system that could be utilized by the whole village.

Conclusion:
At this point in time, Rwanda and other East African countries may not be the best place to implement an aquaponics system.
This is because:

What’s next for Aquaponics in Rwanda?
Dylan reccomeneds
(spelling?)
that if someone wishes to further implement and aquaponics system in Rwanda they should follow a three year plan. One year should be spent domestically in the United States securing funding and drawing out plans. Then two years should be spent working in the country and directly with the people that will be most affected by the aquaponics system.

Where else can aquaponics work?
“Denver jail sustainably grows food through aquaponics.”
Source: The Denver Post

Government: They have a lot of power in allocating funding for prison programs. However, their current interest in the issue may not be very high at this point in time.
Tax Payers: Tax payers have a potentially big influence in helping get the government to fund inmate programs. They can help vote in elected officials that have power to influence institutional funding.
Prison Staff: Prison staff have a big interest in implementing an aquaponics system. The system in Denver currently provides food to feed the staff (guards) at the prison. The staff would also be the ones that are interacting with the inmates and the aquaponics system.
Inmates: Inmates probably have the larges interest in this project, however the least amount of power. They may be able to gain more power if an aquaponics program becomes more popular and is proven to be successful.

FAO Methodological Approach for Aquaponics:
Source: FAO Gaza strip
Identify communities that would benefit most from aquaponic systems based on needs assessment.

Introduce an aquaponic system, using simple and locally available materials including plastic containers, gravel, pumps and plumbing; and only establish aquaponics where there is consistent electricity and access to plant seed and fish seed.

Lessons the FAO learned from Gaza

Many of the poor households that FAO targeted first, lacked the resources to continue buying inputs and farming experience to produce quality crops.

When independently running, they did not have access to local technical support.

So first work with families that have the farming experience to ensure that the aquaponics enterprise is profitable and sustainable within the local context.

Once these households have built their capacities and have developed successful working models, future projects can include other interested families who can rely on technical support from an existing local network.

Aquaponics has to be backed with more research & volunteer efforts, and Cal Poly needs to be a part of it!

PolyPonics has already set up a small scale Aquaponics green-house, it can be studied, improved and funded more by Cal Poly.

“I took two professors on a tour of our facility, and they told me to publish joint papers with the engineering, ag and horticulture departments. If we did that, once we got renowned for it, Cal Poly would support us.“ – Dylan Robertson

Sources (Many linked in text):

Land Use, Soil Loss, and Sustainable Agriculture in Rwanda

New Mexico State University: “Is Aquaponics Right for You?”

Aquaponics-Inefration of Hydroponics with Aquaculture

CTSA: How to build an Aquaponics system