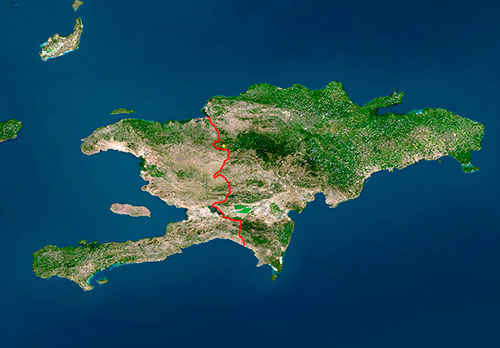 Figure 1. This line denotes the border that separates Haiti (left) from the Dominican Republic (right).
Note the extreme difference in presence of forested land between the countries. 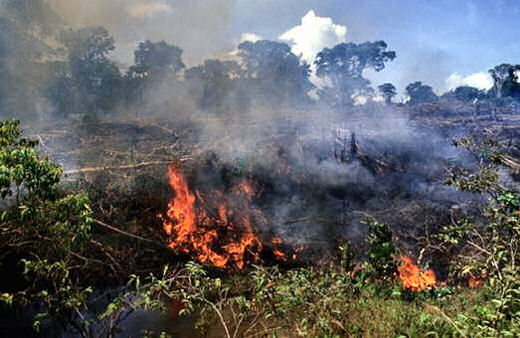 As arable land and resources have become more scarce people look to options such as slash and burn, especially in places like Haiti, as a way of clearing land to grow more crops. Second only to the demand for wood as fuel, trees are cleared in search of better quality soil. Clearing of land through slash and burn practices is highly pollutive and destructive but, more importantly to Haitian farmers, it harms the long-term fertility of the soil by making the soil less protected against environmental conditions. The slashed and burnt soil is more prone to the Haitian extremes in moisture which is directly tied to erosion and nutrient leaching. With each harvest the soil is stripped of nutrients, compacted, salted, and less economic. Additional open burning of biomass continues to bring the soil out of balance via the displacement of key minerals. In the presence of highly consumptive and destructive cows, the land is further degraded and yields continue to decrease. Many farmers become further impoverished and are forced off their land. Our goal is to bring awareness and invest our time and energy into alternative land management practices that can positively impact places like Haiti. We would like to study the use of biochar technologies to enrich soils in an effort that is consistent with decreasing dependence on deforestation while increasing self-reliance for farmers.

Who are the people that we want to make an impact on?

We want to make an impact on the people of Haitian agricultural communities who are interested in creating and practicing a more sustainable form agriculture. Ideally, we would like to address a community with an educational center so that the knowledge and technology may be more ideally distributed.

What types of jobs, trades, skills, and education do they possess?

The population of Haiti has tripled since 1950 from right around 3 million to 10 million inhabitants (while most age and gender proportions have remained the same. The GDP per capita is fairly low to just $1,315 with a 7 percent inflation rate. What is even more shocking, is that remittances

Please explain what this is and provide a reference.
account for nearly 20 percent of the Haitian GDP; currently 70 percent of the population lives under the poverty line. While importing nearly 3 times what it exports, the Dominican Republic is the major trading partner while the United States provides nearly a quarter of the countries trading needs.

What do they produce and how much?

According to FAOStat, the statistics division of the Food and Agricultural Organization of the United Nations, only two of the top ten of Haiti’s agricultural production (in terms of monetary value) was meat products. Coffee, once Haiti’s number one cash crop and export, ranks at number 12 for agricultural production (in terms of monetary value). The interesting thing of note, at least according to estimates, put mangoes as the second grossing crop produced by Haitians. A graph below provides a more detailed outline:

Can we identify our cause with any of the desires of the people we want to make an impact on?

What do we think the average cost to consumer would be potentially? What does this look like compared to the poorest people in the country?

Details about costs for producing biochar are fairly slim due to the issue that economies of scales has yet to hit this “product.” Currently, the price per ton of biochar in the United States is just over 2,000 US dollars or just under 1.30 US dollar per pound. Depending on how one looks at it, there could be a host of reasons why the cost is so high in the United States that the people of Haiti would not be prone too. Conversely, with the cost being so high, biochar could also become a new “cash crop” for the people of Haiti. It is important to note that these economic figures correspond to a biochar producing system that is of industrial scale and that smaller scale systems will yield very different prices and are more labor based.
What if individuals produced biochar and brought it together to a general merchant for export. How would that work? Of course, it would be much better (in my opinion) if the biochar was deposited in the soil there in Haiti instead.

The ultimate goal of this project would be to actually create and implement a biochar initiative within Haiti. However, due to the scope of the quarter system, this is a little far-fetched. That being said, we are currently conducting the project with very few self-imposed limitations. We are currently in the process of creating a set of interview questions and reaching out to potential members of both the San Luis Obispo community and the Haitian community to know more about the successes and problems with biochar (the questions will be uploaded soon). The next step of the project would be to actually implement a small scale biochar production “plant” either on the SEF or the San Luis Obispo City Farm to see if it is even possible for small scale farmers to be able to do it.

Learn more about why deforestation is and remains a problem in Haiti.

Determine the advantages and limitations that Biochar offers on a small scale operation in these areas impacted by deforestation.

Decide the impact and implications of launching Biochar in response to deforestation in Haiti.

At present, this would receive a “B”. I’d like to see a plan of what you propose for the SEF and for research.

I think it would be a good idea for you to collaborate with the coffee group and/or sanitation.

– lets definitely check in with the sanitation team in the near future. i dont see the coffee team being very worthwhile – cam

I think you could have some more links to biochar Bob and the organization he visited.

I’d like to learn more about this organization I spoke with Teo about.

– lets do this eventually…