Prosthetic Design Influences
We began by seeking to replicate and improve the plastic bottle molding process used by the Center for International Rehabilitation. See the About page for more information. After trying different molding methods we presented our proof of concept prototypes to the class and decided to explore other areas. See our molding tests on the Molding the Attachment page.
We decided to make a functional appendage that could pick up objects for everyday use. After looking at the prosthetics that were already available, we wanted to develop a versatile clamping mechanism that didn’t require adjustment with the opposite hand. This makes the appendage easier to operate and makes it usable by double amputees. We chose to use the Hosmer-Dorrance hook as a model for actuation, because cables and straps are a simple appropriate technology.

Cables attached to the back run around the shoulder and open
or close the hook when the arm is extended.

OpenSocket by Bump Nonprofit Design Studio
A $300 open source prosthetic design based on the Hosmer-Dorrance concept.

We decided not to build a Hossmer-Dorance hook because it is a well established design. Other groups have already worked to improve the design and build more affordable, as can be seen in the OpenSocket design design. We thought that we could best advance the field of appropriate technology prosthetics by creating a new appendage design that was extremely affordable. We were inspired by an appendage designed by Kaylene Kau while she was a student at the University of Washington for Industrial Design. We thought that we could make the design simple and more affordable by using found materials.

The goal of this hand is to assist the fully functional hand of a single arm amputee. The tentical is powered by a small electric motor and controlled by a switch on the forearm. The Motor winds one cable while releasing the other, causing the arm to curl. Releasing the cable will return the arm to its normal position.
See more information here: http://www.coroflot.com/kaylenek/PROSTHETIC-ARM. 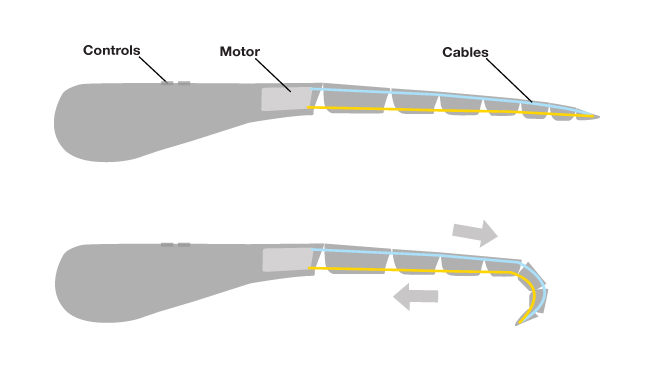 The first iteration of the “tentacle” concept can be seen in this YouTube video below. This iteration was made from an upcycled garden hose, bicycle chain, kite string, and a 2-liter soda bottle. These design changes make the arm easier to construct, more affordable and eliminate dependance on batteries.

A second iteration of a semi-functional prototype that will contract depending upon arm movements. See technical details about the design and construction and more videos on the DIY Prosthetic page.

Tentacle Actuator Test Results
Our tentacle design includes a flexible rubber hose housing, with an internal structure that provides lateral strength in one axis and elasticity in the other axis to allow it to curl. The curling motion is achieved by retracting a cable or in the case of the bike chain, by retracting the chain itself. The ideal material would be rigid in the horizontal axis, have little resistance to curling closed, but would spring open easily and naturally. A bike chain provides excellent rigidity and is easiest to close, but it is also more difficult to open, making it harder to let go of objects.

Design Problems
1. Opening the Tentacle
The tentacle does not fully unwind when the user retracts their arm. This is problem when trying to place light objects on a surface, as they can be easily knocked over. We discovered that part of the problem was that the cables were causing friction in the PVC pipe section. We partially fixed this problem by running only one cable through the hole instead of two, and by cutting the hole at an angle.

We also attempted to use spring steel and elastic to improve the opening of the tentacle, but the steel is too inelastic. We were unable to generate enough tension to completely close the prosthetic with spring steel inserted. We used a 1/2 inch filed bandsaw blade for our steel insert, so it is possible that narrower spring steel may function better. The elastic was not strong enough to make opening easier.

2. Closing the Tentacle
The original tentacle design takes a lot of strength to close completely. We determined that the chain rubbing against the hose, causing energy lost due to friction. We improved the hose design to make closing easier by increasing the number of cuts in the hose, and reduced friction further by oiling the chain. Our modifications made closing the appendage much easier.

3. Maintaining High Grip Force
When the tentacle is used to try to pull a heavy object such as a door, the chain unwinds, even though the cable tension is maintained. In this video, you can see that the tentacle is unwinding, even though enough force is applied to detach the cable from the chain. (soldering or crimping solves this problem, we were prototyping with tape) We have not made significant progress on solving this problem. It will have to be addressed by a future group.