Skip to navigation Skip to content Skip to Footer
Problem Statement: Communities that cook using open fires inside the house produce harmful smoke particles in the air. These smoke particles are primarily harmful to the women who do the cooking and the children present during meal preparation. The World Health Organization estimates that 3 billion people cook using biomass and coal, causing 4 million deaths each year from breathing in these harmful emissions. By providing villages with an effective Retained Heat Cooker (RHC), we can drastically decrease the amount of fuel burned and reduce the amount of dangerous smoke that fills the houses of rural African villagers. In addition to decreasing health risks, our Magic Basket Cooker would reduce the need to chop down as many trees for fuel, lessening the impacts of climate change and CO2 emissions.

Target Audience:
Women who do the majority of the cooking in small villages in Uganda, Africa. Uganda has a population of 39.03 million. Uganda has a young population that is growing rapidly. Uganda has one of the highest fertility rates in the world, with 5.8 children per woman. The infant mortality rate is 57.6 in 1,000 live births. The life expectancy in Uganda is 55.4 years. The inflation within the country is at 5.6%. GDP per capita is $2,000. 78.4% of those 15 and over are literate, 16.2% of males and 18.7% of women have attended secondary school. The families of the area tend to be male-headed and follow Christian faith. Children and mothers tend to do the cooking and house work. The community as a whole is very keen on sharing food and other resources. The country exports coffee, fish and fish product, tea, cotton, flowers,horticultural products, and gold. Uganda mostly imports capital equipment, vehicles, petroleum, medical supplies, and cereal.

Model of our cooker as a cylinder of length L and outer radius r2 with a cylindrical cavity inside with length l and radius r1. The k is the coefficient of thermal conductivity.

Where Tt and Tt-1 correspond to temperatures (in kelvin) at the current time t and the temperature at the previous timestep t-1. E corresponds to the change in energy inside the cavity.
The energy E inside the cylinder is being lost to the outside environment at a rate E=P(T)*dt
Where P(T) is the amount of power entering the system (we expect this value to be negative since heat is leaving the system). The T in P(T) indicates that this power will change as the internal temperature changes.
P(T) is given by P(T)=(Tt-Tout)/R where Tout is the temperature outside of the r2 cylinder and R is the thermal resistance calculated from our model.
R comes in three portions, an open-ended cylindrical shell given by Rc=ln(r2/r1)/2lc
And two shorter, solid cylinders given by R1,2=l1,2/r22. The total thermal resistance of our system is calculated using the inverse relationship of parallel resistors, 1/Rtot=1/Rc+1/R1 +1/R2.
Now we can solve the theoretical curve Tin (t) numerically using our recursion relation and compare to the data we’ve taken.
Ideally, the data will match our theoretical model so that we can alter the system based on needs like how long the food needs to cook, how much space is available, how much water will be put in the cavity, and what the Tout is. All of these parameters will affect the time to reach the danger zone Tin(t)=60 C. 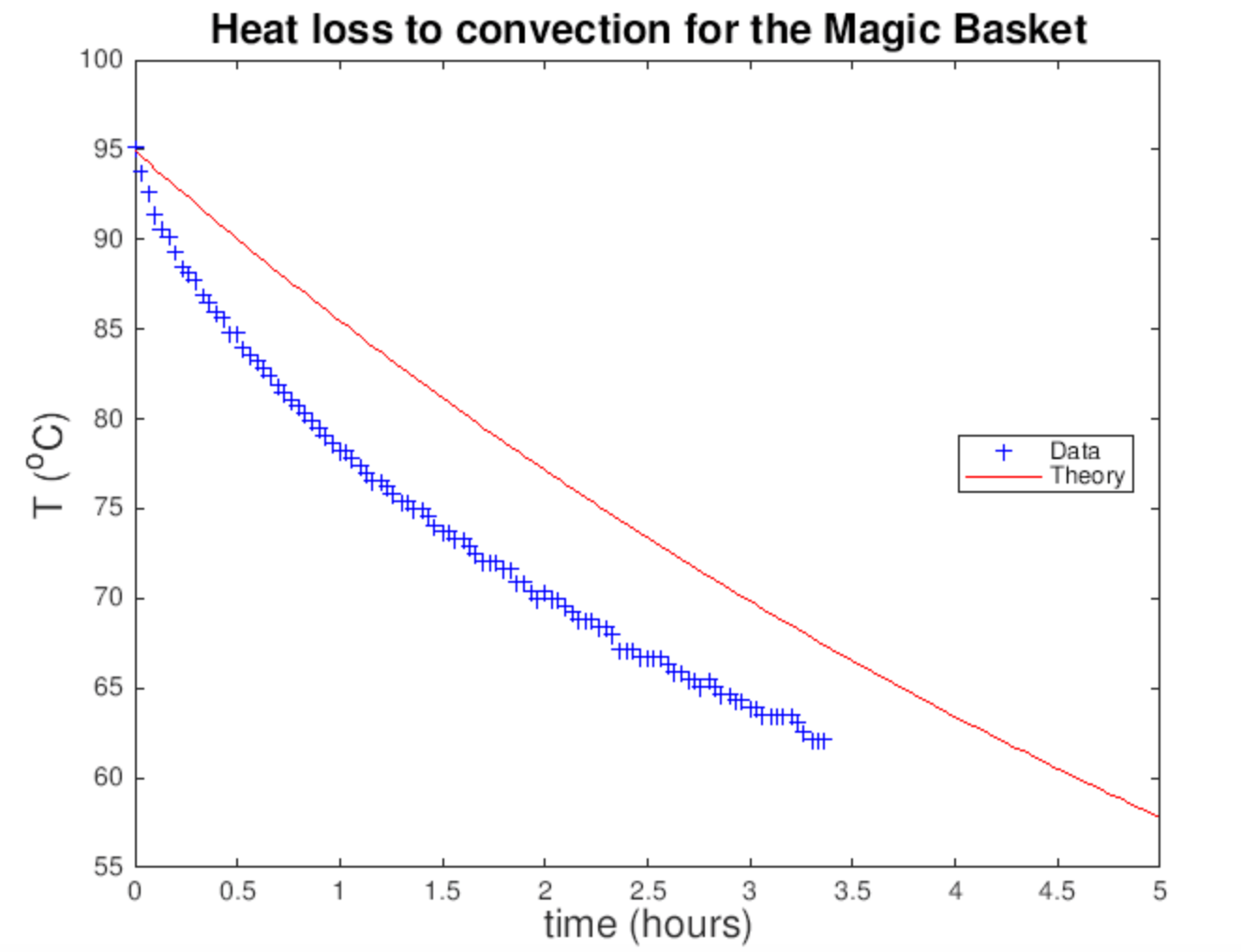 The theoretical curve does not quite fit the data. Instead, the theory predicts that the Magic Basket is more insulative than it actually is (no surprise there). The theoretical curve didn’t take into account two things, convective currents carrying heat from the system, and the capacity for heat to be stored in the rice hulls themselves.

Conclusion/ Outlook:
In future implementations of the magic basket, it may be cheaper to construct it from a bag rather than a wooden box. Another alternative would be to utilize the ground and dig a hole that is insulated with rice hulls. While this would be the cheapest option, it may be affected by rain or vulnerable to other damages. In terms of the impact that our Magic Basket would potentially have on African homes, we believe it would have similar outcomes as the Wonderbag by reducing carbon emissions, improving safety during fuel collection, and minimizing indoor smoke pollution.

Bios:
John Robertson: Senior, Liberal Arts and Engineering Studies major
Cole van Brunt:
Maya Fernandez: Junior, Psychology major, Political Sciences minor. Wants to work in Restorative Justice in the future, enjoys long walks on the beach in the present.
Max Yarbrough: Senior physics major. I will be working toward my single-subject teaching credential starting Fall, 2017. After spending the past 9 years studying science and the technology it produces, I wish to focus on the community aspect of technology. I hope to learn about the misconceptions communities form regarding technology and its implementation such that I can help develop and implement safer and sustainable technologies.