Our group is focused on improving the ventilation system for the greenhouse at Cal Poly’s Student Experimental Farm for Cal Poly’s Aquaponics Club.

Aquaponics is a system of aquaculture in which the waste produced by farmed fish or other aquatic animals supplies nutrients for plants grown hydroponically, which in turn help to filter the water.

The greenhouse is a part of the Cal Poly Student Experimental Farm, located here.

The greenhouse (nicknamed Zion) is covered with two layers of 6 mil thick GT 4 Thermal Anti-Condensate Greenhouse Film, with 91% light transmission per layer, and about 15% thermicity with both layers. Thermicity is a measure of how much heat is able to radiate out of the greenhouse through the plastic. This leads to most of the heat from sunlight being trapped inside the greenhouse during the day.

The dimensions of the base of the greenhouse are 25′ by 60′ with a cylindrical build. The ends of the greenhouse are made of a rigid plastic layer with openings for passive exhaust (openings with shutters) on the Northwest side, and fans on the Southeast side. This is perfect because wind in this area flows mostly from NW to SE.

Ventilation is one of the most vital components in a successful greenhouse. If a greenhouse lacks proper ventilation, the inhabitants can become prone to problems. The main purpose of ventilation is to regulate the temperature to an optimal level and to ensure movement of air to prevent build-up of plant pathogens that thrive in still air conditions. The current system of ventilation has an analog electronic thermostat (Pictured Right) connected to two exhaust fans on the South Entrance (Pictured Above).

The North-West side shutters are not connected to any mechanical device and they remain closed when the main fans on the South turn on. They only slightly open to the draw created by the South end exhaust fans.

The Problem:
The current system is inefficient. The fans are out of date and waste an immense amount of power when used.

Carbon emissions are an important variable to consider as well with the use of these fans. Assuming that Cal Poly’s electricity is generated from a NGCC facility with an efficiency of 50% and the total kWh generation for one year of this green house is ~900 kWh in MJ this corresponds with 3240 MJ of electricity needed. The facility will have to use enough fuel to generate twice that many emissions because of the efficiency so the facility will burn 6480 MJ of natural gas. Natural gas emits CO2 at a rate of 55g(CO2)/MJ so there will be 356 kg of CO2 emitted per year from this greenhouse as a result of using NGCC electricity.

Since the north facing ventilation shutters have to be opened and closed manually they are rarely in the optimal position for proper temperature regulation. Our solution is to extend the thermostat control automation to an stepper motor that will control the shutters on the North and South facing entrances. When the temperature reaches the maximum allowed level depending on the plants housed inside, the shutters on both faces will open allowing air to flow to lower to temperature back to stable levels.

When all power considerations except for convective losses are taken into account (considering a day where the doors and vents are shut, and fans turned off) it can be shown that the following is true over the course of one summer day.

The x-axis is references such that time = 0 corresponds with sunrise. For all calculations solar output, radiation, conductive heat losses, and wind flow were all calculated as a percentage of time to accurately simulate the days effects.

As can be seen from this graph, the maximum temperature inside the greenhouse will be almost 110°F in the middle of the day. This is harmful to plants, so some ventilation is necessary in order to protect the fish and plants. Including this ventilation in our calculations, we can expect the following over the course of a summer day.

The total ventilation power of the fans effect on the temperature as a function of time, when they are set to 90°F can be seen below.

This is the current scenario which shows that the fans will have to be run for 4.6 hours in a day to maintain the peak temperature of 90°F.
This falls in line with the cheapest scenario described above, a cost of $130 per summer, and an emissions of 300 kg of carbon dioxide.

The Solution:
The proposed solution would be to implement a stepper motor to open the ventilation and use the passive 4.5m/s windspeed that flows from the north-west. The following details the effect on greenhouse temperature.

The vents will be opened when the greenhouse approaches 90°F. The reason the graph shows the vents being opened at 85°F is to better explain an interesting phenomenon that occurs. No matter when the vents are opened, their contribution to the reduction of total heat generation within the greenhouse is still a function of temperature. As the intensity of the sun increases throughout the day, the passive wind no longer stops the increase in temperature. This means the fans are still required, even if the vents are opened as soon as the solar input begins. Therefore in the actual implementation the graph will look something like this.

While it is somewhat harder to see, the introduction of the vents halts the temperature right at the desired 90°F which optimizes the greenhouse efficiency for growing the plants. The fans however are only required to be run 1.75 hrs in the day now. This now corresponds with 3.41 kWhs in a day. Which costs 61 cents. This is a cost reduction of $0.80 per day or $75.00 per year. This also lowers the emissions contribution from using NGCC electricity from 300kg of CO2 to 125kg of CO2.

The result of this stepper motor will be a smaller usage of electricity that will achieve the same effect of temperature regulation as a fan.

The stepper motors must have sufficient torque to open and close the shutters, thus to make certain this requirement is met the following motor was chosen to be used. A piece of scrap metal will be welded to the turning shaft, to which we will tie a string around. Then the string will be attached to the end of the vents. As the motor turns counterclockwise, the fans will open, then it will close the fans as it turns clockwise. This will be connected with the programmable controller Chris and Ian made for their senior project. 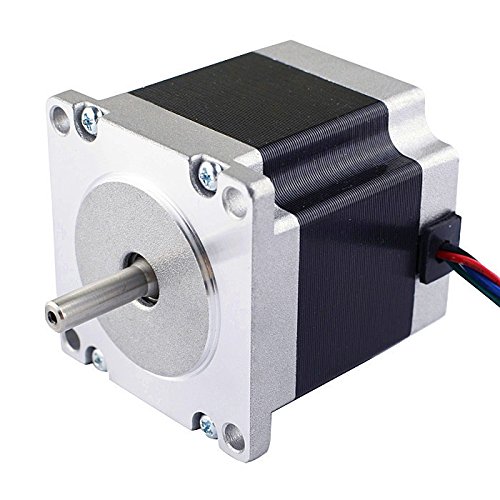 The motor functions at 2.8A, and has a holding torque of 1.26Nm, which should be sufficient enough to open and close the ventilation shutters.
The motors cost $26 per unit, and using four motors (utilizing a single motor for two shutters on the North West facing end), the entire cost (sans tax) reaches $104, which will essentially pay for themselves in just over a year. Other costs to this project may include wiring and conduit to connect automation to the motors.