Skip to navigation Skip to content Skip to Footer
SLO Homeless: What Can We Do To Help?
An estimated 2,408 people are homeless each night in San Luis Obispo County44% are people in families22% are under age 12 (slocity.org)

Our Video
(Video was good quality. However, I would like to see a plan of where this might go. It left off with, “we’d like you to work with us to for a homeless transition program.” What would that look like?)


Project Purpose
We agreed that there was something personal about tackling an issue that we are immediately surrounded by. Even San Luis Obispo, “The Happiest City in America”, has issues. All residents of this city spend a lot of time downtown and see members of the homeless population everywhere. What led them to being in this position? How do they feel about their lifestyle? What do they wish was different about their situation? What could we do to satisfy those wishes? These are the questions we wanted answers to. By listening to their wants and needs, we felt we could make a difference in the lives of the people that many of us walk past week after week.

Area of FocusOur project is focused on Downtown San Luis Obispo. This area has a handful of amenities for the homeless population. Some things are as simple as buildings to provide rain shelter, steady people traffic, and relatively steady day and night temperatures. Other more organized amenities include homeless shelters, the Transitions Mental Health Association, and public services like the library and bus system. However, the homeless population still deals with difficulties with shelters not accommodating pets or those with serious alcohol and drug use.

What Should We Do?

We decided to take it upon ourselves to make a difference, so we walked the streets of downtown San Luis Obispo to interview some of the homeless population there to get a sense of what they believe their biggest needs to be.

Interview #1
This first man was rugged looking, no belongings, and extremely worn out dirty clothes. He had a sign that said ‘change’ on it, so we figured he could be our first interview. After attempting to hand him a dollar, he asked if we had a 20 dollar bill. We replied no, and asked if he would at least like the dollar, but he refused and wouldn’t speak to us any longer. We figured it was best to move on to our next interview because his state of mental health appeared to be skewed.

Interview #2
The second interview we had was much more engaging. She was a white female, brunette hair, around 25 years old. She was very outgoing and friendly and was playing a game on her smart phone when we walked up to her. She initially said she didn’t know exactly what she wanted, but then provided a handful of things she believed would be helpful. She desired a place downtown that the homeless could congregate, entertain themselves, hang out and relax. Somewhere with games, music, and do their own thing and feel welcome. She also wanted easier access to resources for personal hygiene and appearance keep-up. Toothbrushes, showers, soap could be easier to come by, and a beauty salon of sorts where women could get make up done, etc., would be appreciated by many members of the community. 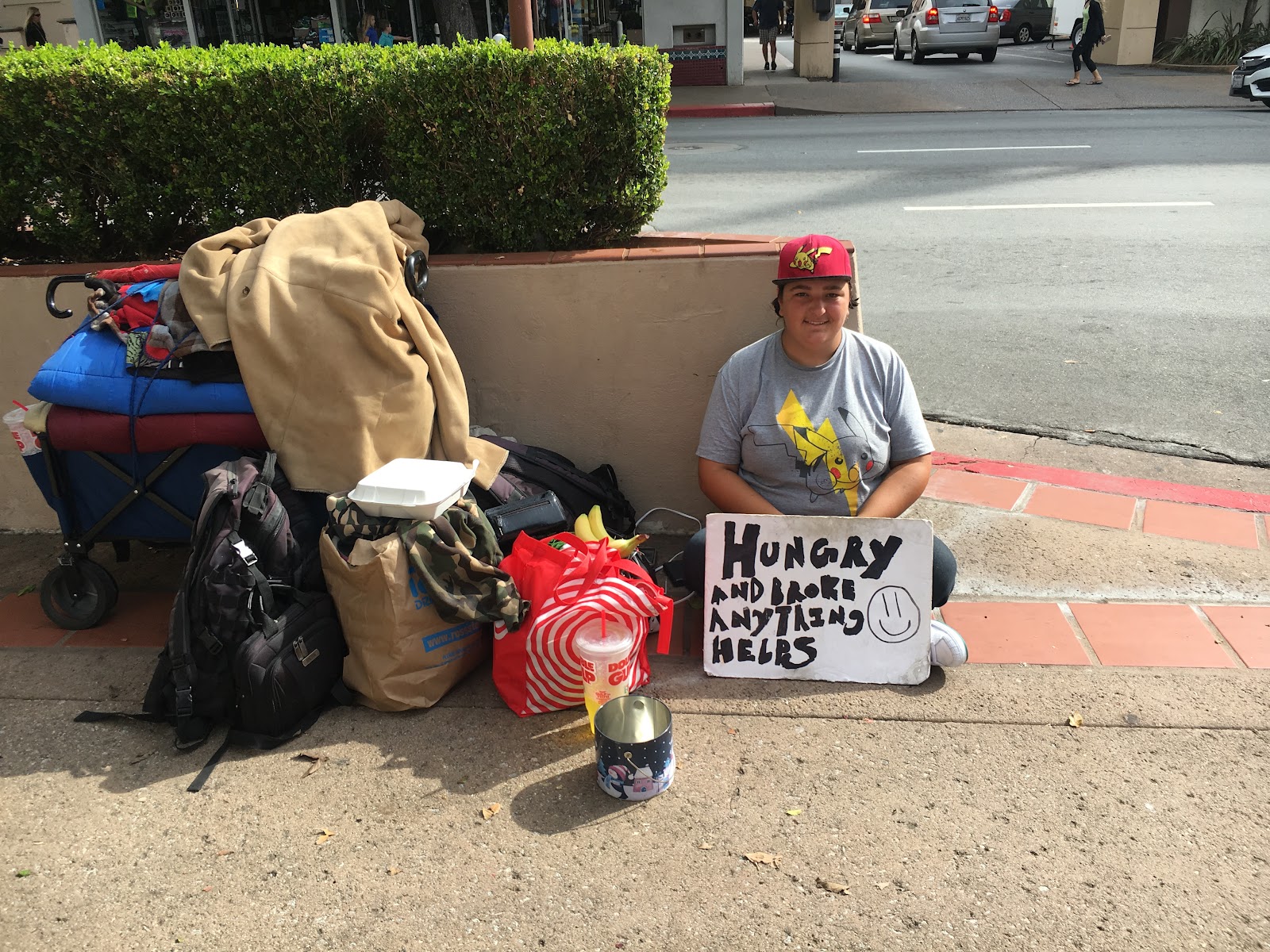 Interview #3
The third interview was with another woman, she was white and around 60 to 70 years old. Raspy voice, wearing jeans and a tshirt. She spoke of some insight into other things that would be helpful for the community. She was having difficulties with her SSi (supplement security income) coming through. She has some pains that she needs medication for, and has a hard time getting insulin through Medicare. Many of her friends drink instead of taking medicine to deal with pain, and obviously that kind of habitual use of alcohol leads to dangerous problems. She knows four homeless men who have died in her past on the streets. She has a dog that helps her spirits, but having a pet does make transportation and finding shelter more difficult, because this dog is not a certified service dog. She would also like hygienic resources available, saying she goes 2 to 3 months in between showers. She will sometimes shower at her friends place. She does not even mind if the showers are cold, or if she only has a bar of soap, that is just enough for her. 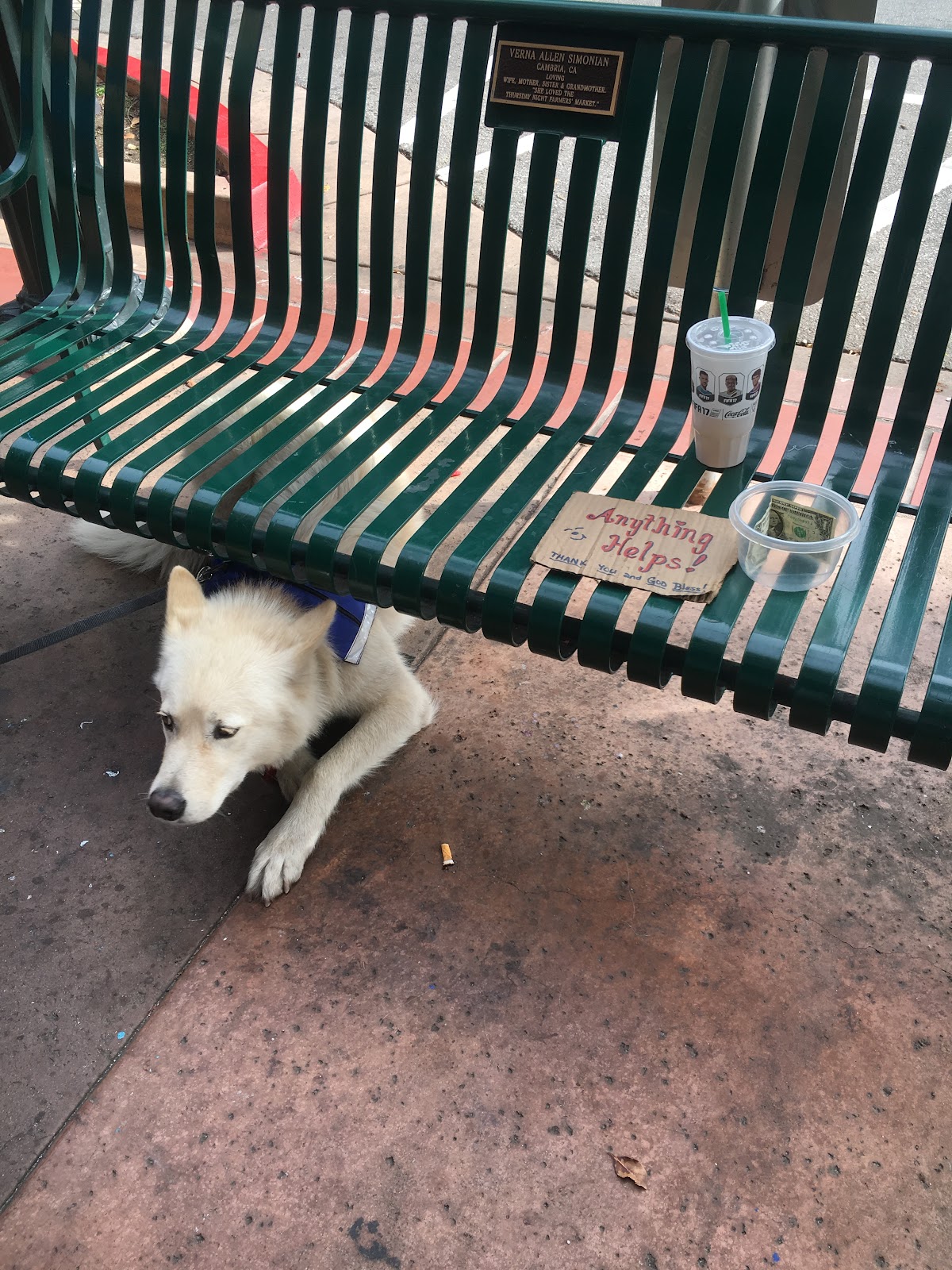 Interviews #4 & #5
On a visit to Growing Grounds, an organization ran by Transitions Mental Health Association, I met a couple men who are success stories of the program. The first man is now essentially running Growing Grounds and I would never have guessed suffered from a mental health disorder. However, in his past he spent a significant amount of time homeless. When he first took the job, he was very reserved, but over time learned to manage his disorder well in a work setting, and get to where he is today. The second man had been at Growing Grounds for almost 8 years. He said he was nearing the end of his tenure here, because he has been successful and now could find employment elsewhere, and Transitions wants the positions at Growing Grounds filled by people who need them more. He was once in that position, but thanks to a chance at employment has been able to reach a better place.

SLO Plans and Programs in Place

What do we do now?

We met with a few of the board members from Transitions Mental Health in San Luis Obispo to ask them about their program. This program houses people so that they are off the streets and in a sustainable living environment. Other organizations like the Prado Day Center supply food and showers to those in need. Both of these organizations were lacking in one area, and that was sustainable employment opportunities for the homeless.That is where we come in. We found out that jobs will not employ those with limited work experience and a bad odor. Our group has decided to create workshops for the homeless. These workshops include hygiene management and resume building. Most of the homeless citizens want to get employed, and now with these workshops, they will be better equipped to work in a public setting. Joe Madsen of Transitions Mental Health quotes, “We need to solve homelessness instead of just managing homelessness.”

(OK. good start. Where do you see this going? What is the next step?)